Rachel Lowther, ‘Nothing Compares to the First Time Getting Shot At’

This exhibition by Rachel Lowther and the research residency with The Glasgow School of Art’s Archives & Collections that preceded it have been commissioned by GSA with support from Museums Galleries Scotland’s WWI Fund. Taking a lead from discoveries amongst the World War I holdings in GSA’s archives, Lowther has produced a moving, funny, sickening, stimulating and moving exhibition, complemented forcefully by an adjacent Lowther-selected display of letters and materials from the GSA collection. That display allows insight into the impact of the First World War on students and staff; in addition, the careful selections resonate powerfully with the new work in the main Reid gallery space.

All in, the combined complements add up to something disturbingly special. Lowther uses her established armoury of humour, pathos, popcraft and theatre to stage a multi-media and multi-modal show that brilliantly marries select references to actual worldwarfare with fresh studio fictions that illuminate the actual. 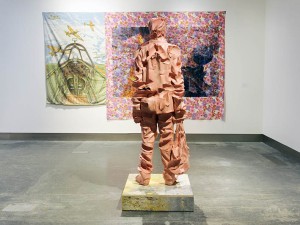 A centrepiece and touchstone is the sculpture, ‘George Goes Shopping’, 2015. The figure is eerily statuesque and yet, by virtue of its alarming aesthetic, stands agitated. In this paradox of sorts there is something very Lowtherian. ‘George’ is representative of the artist’s mischievous and poetic bringing-together of elements that convention would hold apart. By creating critical play between such elements Lowther’s work directs our attention to the reality of the proximity of certain things. The monumental is not for man going shopping; dawdling to shops with tote bag is not the context for brutality; aggressively destroying the caressed form of the made objet d’art is not the modus operandi of the artist…

As Lowther’s insight reveals, we (secretly desire to) miss the point by holding these types of things apart. The brutality of war, then and now, but perhaps never more so than now, is indeed about the commonplace being brutalised by the incursion, by the invasion, by the deformation of the ordinary and the innocent. Whether thugged into you eye-to-eye or purveyed from the cloud beyond the clouds, warfare despoils. Tragic tragicomic George stands for all of us in common, molested as we are by degrees by the violence of the purveyors and the sponsors. My sickening feeling is that Lowther draws our attention to that strain within – a strain, albeit diluted, that is tapped by the Artist more regularly perhaps than caressed convention would have it.

If it is not immediately apparent what horror has befallen poor George, we can follow his still-attentive stare to a wall hanging for a schocking clue. George peruses in resigned silence an image of kids too young to be too familiar with guns and mock execution. Their little pal or little brother – the one whose little skull feels the touch of two gun barrels – grimaces, or smiles, or masks a laugh, or tremulously bites his nails, or, now that you have been moved by the oxymoronic cataclysm that is Lowther’s poor George, maybe the kid does all of that all at once in a heart-rending paradoxical mash up.

We, like George, look forward in dismay for the play-execution image is carried by, of all things, a duvet cover. Once again, a Lowtherian incongruity creatively clubs us into recognising the chilling proximity of domains and with the hanging reminiscent of some kind of death-shroud-cum-comfort-blanket we reel at the brutal reach and everyday impact of violence.

‘Mother and Child’ 2015, gives again the transmogrification of George, and takes our unease a stage further. The mutation formation of George has struck again. Still, some sense of resoluteness in stoic George is redoubled here, as mother and child despite the assault retain a certain formal composure. Ahh, but, wait, Lowtherian proximalism gets us again: the child is perhaps not being protected so much as being offered up. This is now a dreadful contemporary pieta; contemporary in its giving no repose to the grieving mother, contemporary in its erosion of grace in grief. All is in a state of migration, movement, un-rest, mutation, a molestation of the highest order. The features of mother’s eye, nose and mouth remain discernible which only adds to the wrongness of the bodily deformation.

The three-video piece by the window helps us see clearly what has happened to these figurations. Lowther, in chicken costume has brutally clubbed George with a pickaxe handle to achieve his singular aesthetic. Mother and child get it too from the artist on the left-hand screen. A third sculpted figure of a boy gets it on the right-hand screen.

So serene to begin, so wrong come end, we are treated to tweeting birds and a slow panning shot of Mother and Child while George is set about. Staring at one thing, we are, again, forced imaginatively to another. Lowther’s wild swings in party costume are for a moment in mind aimed at George as piñata – the tragicomicality of the implied contrast doing well to emphasise the material unhollowness of the body human. Snapping out of that contrast, take a deep breath and look out for the memorable contact between cudgel and mother’s abdomen: the aberrant rendered perfectly in dynamic visual form.

With the third sculpture in the Reid, the walking/running boy, Lowther takes her signature proximalism to new heights. This work offers in cascade the iconography of Futurist bronze and the iconology of napalm runaway complete with skin unfolding from right hand, flayed facets of continuity in space. There is much more to write and feel about that poetic abomination.

Another hanging of bedware links the main space to the projection room. Stitched together with printed scenes of graffiti from bombed-out Syria, and hung out to dry as part of the same mentality of molestation, the duvet is adorned with the visual culture of smackdown male wrestling. All moves are exertions in extremis; John Cena is about to throw some George; Batista is taking a hit; Rey Mysterio is in mid air meting out pain while flying. These cultures, images, actors and impulses are the backdrop of the frontdrop contextual and artistic episodes.

In the projection room now, and past the duvet-vehicled welcome ‘Raw is War’ from wrestler The Rock, we see short video pieces, ‘Girls’ 2014/2015 and ‘Tombstone on the Turnbuckle’ 2014/2015. The girls are goats and they are shackled and milked. Lowther’s young nephew appears in the other video, playing smackdown with his toy figures and wrestling ring.
Nephew’s excited growling soundtracks the room as the milk producers are pumped. The girls are chained to the apparatus of production of product; chained to the supply chain, literally plugged into the channels of industrial capital. Nephew reveals an American accent in his accomplished and knowledgeable commentary. The girls are distracted from their situation (and by extension from nephew’s outbursts) with food in a trough. Tellingly, nephew’s playroom predilection is for a last-man-standing bout. One toy man stands last, propped up by the hand of the fledgling ringmaster.

‘Quacker’ 2015, a hanging fibreglass whatthefuck, has been inexplicably shot through the partition wall; better – shat through the partition wall, as the entity has collected gunk that is surely a Lowtherian amalgam of oil and excrement. Quacker is a mildly demented tweety pie, a Disney interloper, some kind of cipher of American entertainmentism, a vividly horrifying Bunker Buster set to explode its fibreglass skin. This piece above all connects Lowther to her NYC pedigree and attests to the artist’s expertness at drawing from the visual portfolio of the child to club the oft po-visuality of contemporary art.
The exhibition’s title is a quote from a British soldier serving in Afghanistan in 2010, and it plays its part in keeping us close to the reality of context. With that in mind, and before you go, for one final unnerving Lowtherian complement carry that title to the pieces in the corridor from the GSA archives. Traverse time and imagine the pickaxe handle-thud of missile into flesh while you read of the consternation of the school secretary in 1917 irate as he is at the simply unacceptable lack of sugar in the staff refectory. There is barely enough for tea, let alone for kitchen manufacturing.

‘Nothing Compares to the First Time Getting Shot At’ is a powerful and distressing and extremely successful exhibition, one that hits hard to uncover insight into war and into something of art’s creatively courageous methods of critique, whatever the topic.